Delta update is a more efficient mechanism for updating software over-the-air (OTA) when using cellular networks (e.g. 4G/LTE) which enables faster downloads and bandwidth cost savings. Mender offers the ability to generate and only deploy the difference (delta) between the software version already on the devices and the new version, on the binary level. Depending on the cellular technology and network operator, this can translate to significant data transfer cost savings with smaller file sizes and faster downloads. These savings can magnify with the size of the device fleet and the number of updates. According to an online survey conducted by Mender, approximately one third of all connected devices currently use mobile networks. This amount is expected to grow significantly with the advent of IoT and the proliferation of connected embedded devices across a variety of industry verticals.

To illustrate the cost savings, we’ve considered a simple model that only looks at the data transfer cost over a typical mobile network in the U.S. The cost of mobile data varies significantly across countries worldwide and cable.co.uk recently released an extensive analysis of mobile data pricing across the globe with an average cost of $12.37 for 1 GB of data in the U.S. We understand that the referenced data is based on end-user pricing and channel customers could see lower pricing but the relative magnitude of update costs are still valid. If, for example, an existing OS image that is 239 MB (after compression) is updated with a new file that adds additional 30 MB to the total size, with delta updates only 30 MB will be downloaded instead of 269 MB which is the actual full image. The 30 MB could not necessarily mean an increase in the image size but rather only 30 MB of image has changed and is being deployed over-the-air. This translates to significant cost differential as shown in the chart below, with expected faster download times with the smaller file size. 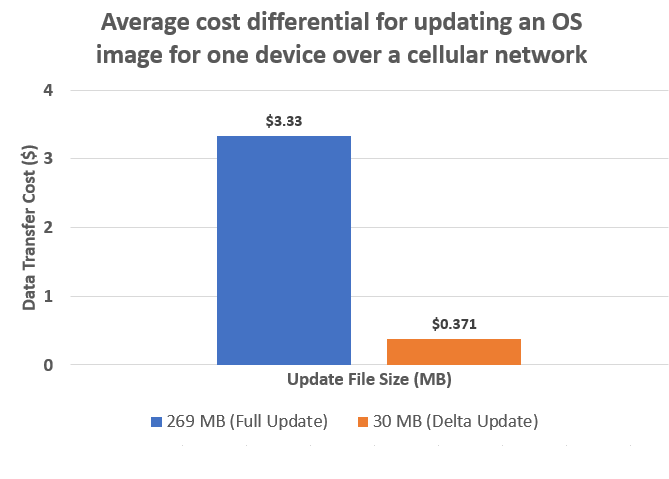 Based on the above model, the average cost savings for one device and one update is 89% and if you scale your deployments to 1000 devices and four updates per year this can amount to $1,484 with delta updates and $13,310 with full image updates (no delta).

To utilize binary delta updates with Mender, there are some requirements:

In future releases, the Mender server will receive automated management of delta updates, including support for automatic generation of deltas depending on the software running on each device.

See a tutorial on how to do delta updates with Raspberry Pi 3 and Mender Binary Delta Update Module to learn more.